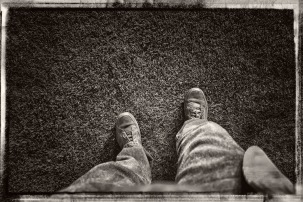 Well here is a fine photo… Yes it’s a photo of my feet… Standing on yes grass…not many people think about history… or what might’ve happened on a particular spot… Whereas with me I always think of these things… When I did cruises to Italy I often wondered to streets in different cities like Venice… As I wandered down the old streets I imagine who else walked down the streets… I mean did Michelangelo or Christopher Columbus walk on this path there’s no telling… But now back to my feet standing on the grass… Well a week or two ago I attended a Paul McCartney concert at Candlestick Park… It was the last concert to be performed at Candlestick Park… Ironically 48 years ago another band ended their tour and their public performances at Candlestick Park… I was at that concert I was setting on the third base side at Candlestick Park…. The band playing was on the stage… Right around second base on the ballparks diamond…. Around the band was a 6 foot high chain link fence and endless amounts of security people the band only played for around 30 minutes……. but as long as I live I will never forget that 30 minutes….. Of course the band you probably already have guessed… Was the Beatles…. So now you ask yourself what does this have to do with the photo of you standing on the grass… Well when I was at the Paul McCartney concert I was down on the playing field and I had worked myself as close as I could roughly where the Beatles were playing on that day August 29, 1966… So this is simply a photograph of me standing where  the Beatles played 48 years ago….